What’s the Difference Between a Flat and an Apartment in Hammersmith?

What’s the Difference Between a Flat and an Apartment in Hammersmith?


The word ‘Apartment’ derives from the French word ‘Appartement', which comes from the Italian form of the word, ‘Appartamento’. The core of that Italian word ‘appartare’ means ‘to separate’, as in ‘separate a building’.

The word comes from Roman times when housing costs were so expensive within the city walls in Rome. Savvy property owners split (or separated) their houses into what we know as apartments or flats today.

The word flat is derived from the Old Scottish/Old English word 'flet'. The flet is the interior of the home. Some also think the phrase stuck as most flats are on one floor, and so by definition, the accommodation is on the flat (i.e. no stairs inside).

The country has an enduring housing shortage. Not enough homes are being built, and even though the Government is aspiring to build 300,000 new homes annually to match demand and keep costs of housing affordable, less than 250,000 were built in 2019, the best rate in the last decade.

And that is why some say the simple solution to Britain’s housing problem is building more apartments/flats.

The British population has been growing by more than half a million every year, for the last twenty years. Yet just over 175,000 homes have been built annually. One solution is building more apartments – and on the face of it, the facts stack up as they are cheaper to heat, the views are often unique and they use less land.

To look at what we do as a country with our apartments, it's important to look at Europe to see how they live so that we can compare the percentages of flats/apartments lived in:


Quite a stark difference, isn't it! Now let’s look at Hammersmith itself. 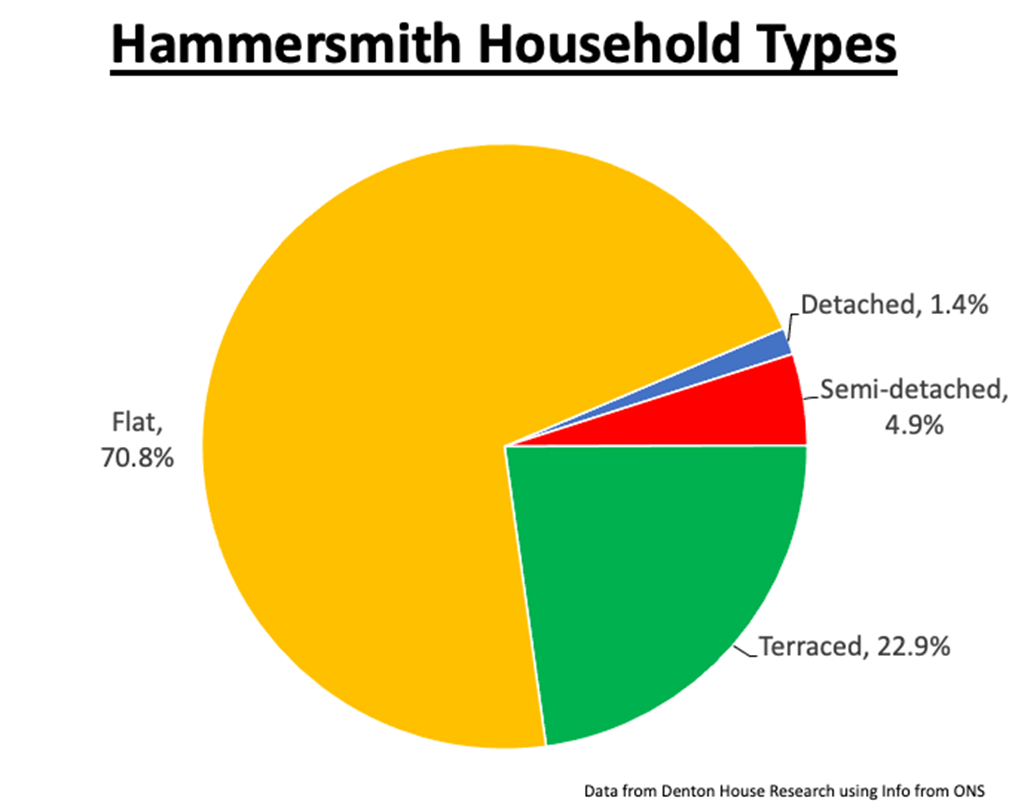 Even though only 1.2% of the country has residential property built on it (and an additional 3.5% are gardens), building houses is low-density land use. Is it sustainable in the long term to continue to build that way in Britain, a country with a similar population to France yet having less than half its landmass?

If we continue to build just over 5 in 6 new households as houses, surely sooner or later, the precious green belt around our towns and cities will have to go. And I know many of you will say use brownfield sites. Of course, there are brownfield sites, yet …

in the whole of the Hammersmith and Fulham area, there are only 20 brownfield sites, totalling only 42.5 acres, which would only provide 2,760 houses – so not many!

The country needs a decent supply of homes for its growing and ageing population. Many of you will frown when it has been suggested, even if it's for environmental reasons alone, most of these should be apartments/flats.

Don’t get me wrong, the love/hate relationship with the apartment/flat and the British is well-founded. Many apartments/flats in Britain are not suitable for happy family living. The high-rise ghetto council blocks built in the 1960s didn’t help with their poor communal areas, lack of maintenance and lifts that didn’t work.

Why do so many more Europeans live in apartments?

In mainland Europe, the apartments are larger. For example, in Germany, they are 974 sq ft; in Denmark, they are 1,452 sq. ft; in the UK, they are only 793 sq ft. Also, European apartment/flat owners have more storage areas, higher ceilings and better communal areas. It is a vicious cycle. Poorly made small apartments make families side-step them, which makes new home builders construct apartments unsuitable for families, which means the situation worsens. This results in the British property market trying to expand our towns and cities outwards into the countryside with houses, rather than upwards into the sky.

I am not suggesting 20-storey high-rise tower blocks for one second. Looking deeper into the information from Europe, most people live in low-rise three and four-storey purpose-built apartment blocks.

To begin with, these new apartments/flats need to be justly desirable for families and be seen as such by the local population. The building materials used, communal spaces, the building’s functionality, and design specifications must not only meet but exceed current building specs on houses, or planning permission should withhold.

Maybe the Government could incentivise builders to build apartments/flats instead of houses to improve the supply of quality apartments/flats with tax breaks?  Things will take decades to change, yet I thought it was appropriate to discuss the matter in such an environment as this.

These are my thoughts, what are yours? Call Willmotts for property advice or information with property rentals, Lettings, sales@willmotts.com or call 020 8222 9958