The housing market as lockdown lifts: survey May 2020

Restrictions on the housing market in England were unexpectedly lifted on 13th May. We knew that around 370,000 transactions had been ‘caught’ in progress on March 23rd and that only a small proportion of those had been completed during lockdown. The question on everyone’s minds, was whether the pent-up demand to buy and sell would be unleashed, or whether the extraordinary experience of a global pandemic would leave us with a cautious and reluctant market.

Over the following 10 days, Dataloft carried out a snapshot survey to gauge the mood of potential buyers and sellers across the country. Were those who had been thinking of moving earlier in the year still happy to commit to the market within the ‘new norm’ of socially distanced viewings and all the challenges of moving in the current climate? Or, will home moving decisions become yet another cancelled objective of 2020, moved into the ‘maybe next year’ category or even shelved indefinitely?

Summary
The results support agents’ reports of an active market. The vast majority of potential vendors still intend to market their homes and a large proportion are prepared to make the step as soon as possible, or at least within a few months. The majority are comfortable with in-person viewings as long as correct procedures are followed and, while many vendors still hope that the market has not dropped in price, there is also a widespread understanding that they may need to accept some discount.

Buyers also showed themselves to be highly motivated to continue with their home search, with many hoping to make the move sooner rather than later. Some are looking with a lower budget than they were earlier in the year but, for the majority, the amount they intended to spend, had not changed. There is one area where the experience of lockdown will have longer term implications though, as many buyers have reconsidered what really matters most in choosing their ideal new home.

Vendors
Around half of respondents had been planning to sell their home before lockdown restrictions put a halt to their plans. Of these, the vast majority (95%) still intend to sell their home. More than half (52%) plan to list their home for sale as soon as they can and a further 27% will sell within a few months. Just 5% have changed their mind completely while 16% deferred their plans to next year.

Potential vendors outside of London displayed more urgency. 58% of those outside of London who had been considering listing their property for sale before lockdown, are now looking to sell as soon as possible. This compares to 42% in London, where buyers were more likely to bide their time. The small proportion who have cancelled their plans is consistent both in and outside London. Homemover Survey, showing response of those who had been planning to sell their home before lockdown The guidelines on re-opening the market included recommendations on social distancing rules to safely carry out valuations and viewings. Nonetheless, it is understandable that vendors might have some concerns about allowing people back into their homes. It is no surprise that those who are looking to delay their sale until next year showed the greatest concern about allowing physical viewings. However, 83% of vendors who are looking to sell as soon as possible were either very or fairly comfortable with having potential purchasers view their homes assuming social distancing measures were followed. 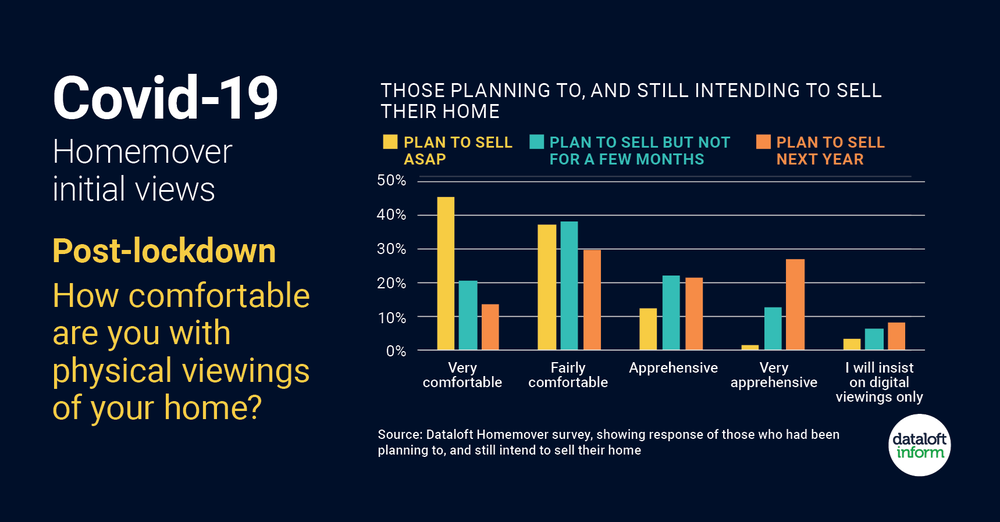 Homemover Survey, showing response of those who had been planning to, and still intend to sell their home While 69% of those who are still looking to sell their homes in the short to medium term expect to market their properties at the same valuation that they were given before Covid-19, there is a sizeable proportion who have accepted that the market value of their home may not be the same as it was. Almost a third, 27%, expect to market their homes at a lower price. Homemover Survey, showing response of those who had been planning to, and still intend to sell their home Home buyers Three quarters of respondents to the homemover survey had been actively searching for a new home before lockdown. Of these, just 6% have cancelled their plans completely. More than three fifths are actively looking to buy as soon as they find the right home or sell their existing property. London buyers seems a little more hesitant than those outside of London. While 92% still intend to buy, 35% are delaying for a few months or until next year compared to 24% of buyers outside London. 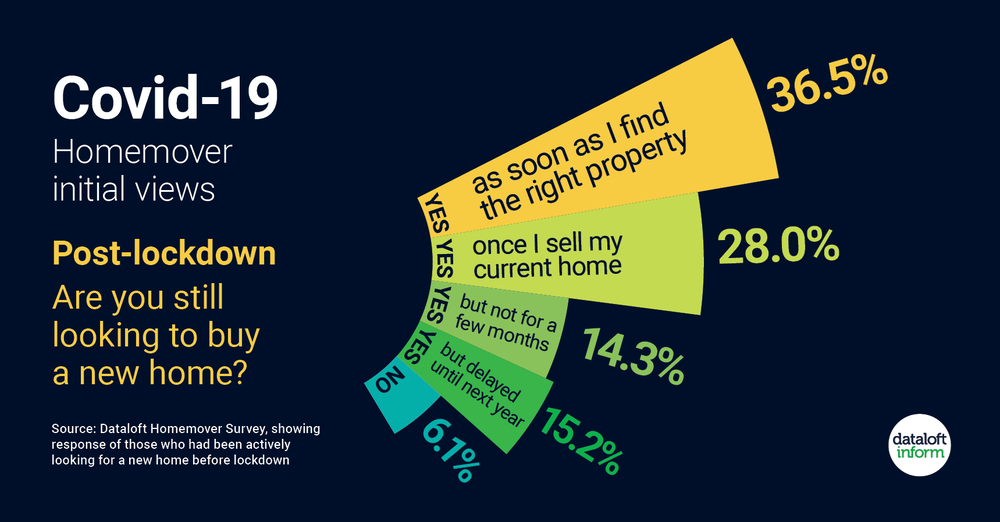 Homemover Survey, showing response of those who had been actively looking for a new home before lockdown Just under half (46%) of buyers’ home requirements have changed as a direct result of lockdown and Covid-19. With working from home set to become the ‘new norm’ for many in the near future, space to work and broadband speeds have become a much more important consideration. Topping the list though, was the rise in importance attached to having a garden. Almost a third of buyers said that having a garden has become a much more important consideration for them than before lockdown. Homemover Survey, showing response of those who had been actively looking for a new home before lockdown and still intend to move. Respondents could choose more than one option For the majority of buyers, the experience of lockdown has not changed their home-buying budget. For those still intending to buy, 71% were looking with the same budget as before. Only a fifth (21%) had reduced the amount they intended to spend and, whether that change resulted from concerns over their employment or wider economic conditions, they remained confident enough in their own personal circumstances to be looking to commit to a property purchase.

Footnote:
Over the ten day period following the reopening of the housing market, agents across the country were asked to send out a short survey to their list of potential applicants and vendors. In response, Dataloft received just under 450 completed questionnaires. Homemovers responded from across the country, with around half being Londoners.