The housing market – including prices, mortgage approvals and rental prices – are viewed as symbolic of wider economic trends, such as in investor and consumer confidence. House and rental price growth, or lack thereof, is seen by economists, media commentators, and the public as a fundamental economic indicator, and these metrics always get a lot of air time.

Inflation measures are widely seen as the way to understand price changes across the board, but few analyses of house prices changes take this into context. Analysing the change in real house prices – that is, adjusting for inflation – can paint a more accurate picture of how price levels have changed over time. Zero nominal price growth means a fall in real terms if there is positive inflation.

While accounting for inflation softens house price and rental index growth somewhat, it still does not make for pretty reading. Compared to many other goods and services, increasing demand for houses (both for purchase and to rent) and a lack of supply has meant prices have risen quickly.

The below graph, using ONS data, shows house prices in the UK since 1990, both adjusting for inflation (real house prices), and not (nominal). The differences are clear to see. 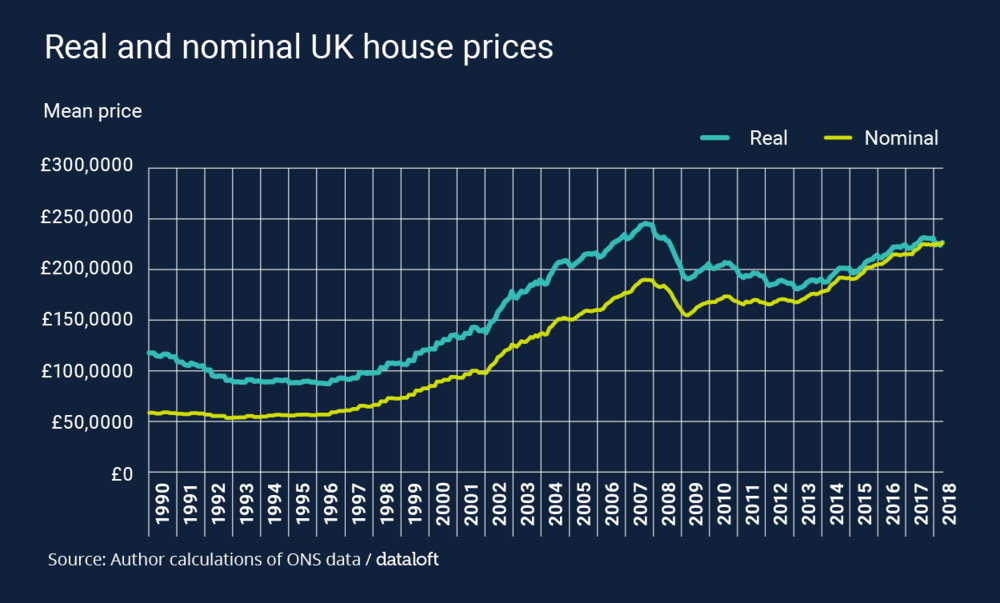 In January 1990, the average house cost just over £58,000 – but in today’s money, this would have been nearly double this, at over £115,000. Both curves show a similar trajectory, although inflation-adjusted prices show more obvious changes, especially in their decline in the early 1990s, which is partly due to the high inflation rates (of over 7 per cent) during this period.

In the decade to January 2005, nominal house prices grew 172 per cent, whereas this was marginally lower at 131 per cent when inflation is accounted for. While inflation does lower this figure, price rises in the housing market over long periods have been very high, as has been well documented.

Most commentators like to point to house prices at the moment being at record highs. When inflation is taken into account, however, prices are shown to actually have peaked before the financial crisis in late 2007, at nearly £250,000, and have yet to make up the losses they experienced during 2008–2009 almost a decade later. Further, nominal prices suggest a bottoming out of the market in 2009, but adjusting for inflation suggests prices decline a little until 2012, when they started to grow again.

With low inflation recently, the two price trends have tracked each other closely, and price changes that are widely reported can be observed as real, as well as nominal.

The ONS’ index of private rental prices can show how adjusting for inflation slightly changes our interpretation of the large rises in rental costs across the country. The graph below uses a different way of showing this relationship – comparing annual change in the consumer price index (CPI) and growth in the rental price index. 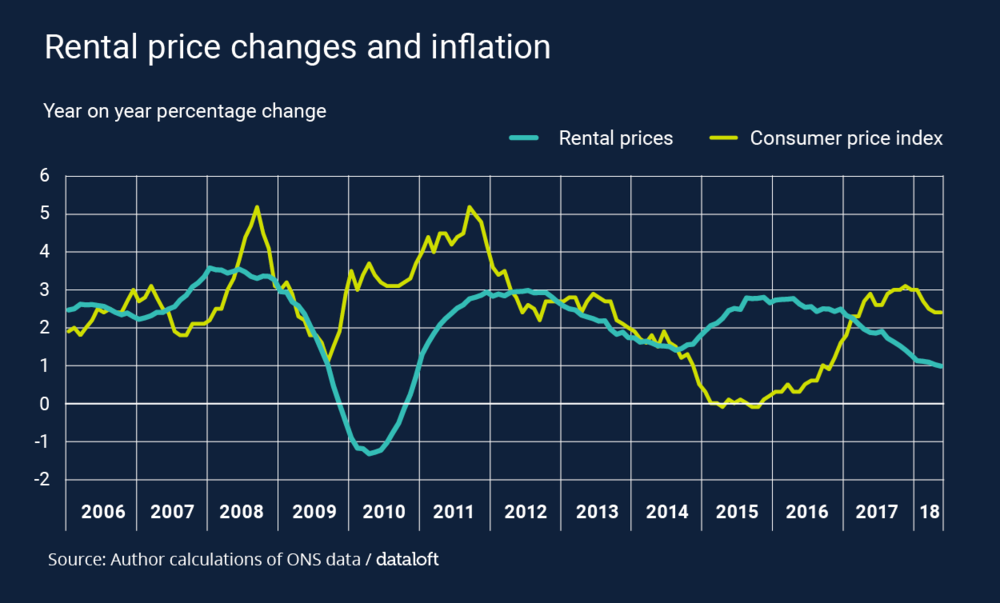 Times when the lines roughly track each show that private rents are broadly rising with inflation, such as during 2006 and from mid-2012 to mid-2014. However, the months and years in which they diverge show occasions when differences emerge. During 2010–2011, rental prices fell, and rose slowly compared to prices overall in the economy, but during 2015–2016, they rose much faster as inflation rates fell to near zero.

Housing costs are an important part of overall household expenditure, accounting for approximately 10 per cent of all spending, yet have often failed to be captured by price indices in the past. The ONS introduced a measure called CPIH (Consumer Price Index plus Housing) which sought to rebalance this, but has come under some criticism and has had its ‘national statistic’ label removed.

Understanding the relationship between house price, rental price growth, and overall price growth for goods and services is therefore important. It can, for example, show the increasing unaffordability of housing products relative to other things, rather than just a basic price rise – although there are other factors which can help determine affordability, such as wage growth and credit availability.

Are you trying to find a happier place , call Willmotts for property advice or information with selling and or buying a home please email sales@willmotts.com or call 020 8222 9958