What’s in a name?

Roads, Streets, Close or Square; Which Is The Most Popular And Does It Affect Price.
We are all aware that in general terms apartments are less expensive than houses, that garages, gardens, or being close to a good school can add value to the price of a property and that certain areas are considered more ‘sought after’ than others. However, are certain street addresses more common than others, and does the price of a property vary whether you live on a road, or a street in a close or on an avenue?

The Popularity Of Roads
Across the UK there are just under a quarter of a million miles of road (246,500 miles) of which, over half are ‘U’ roads – unclassified roads, typically residential streets or rural lanes.  It is on such roads that most UK residential properties are located. (source: Department of Transport, 2016 and 2017).

The Top 10 Most Popular Street Suffix 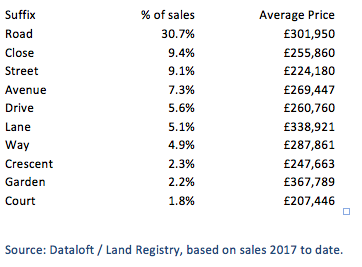 At the top end of the budget, just 0.5% of all properties sold this year have been on a “square”, where the average price is £462,895, a stunning 53% more expensive than a “road”.  Perhaps, not unsurprisingly, over 30% of all purchases on squares have been across London.  These are the most expensive locations across the capital, with the average price of a property just shy of £1 million at £942,966.

Names That Add A Premium

Regional VariationsBetween street suffixes there is considerable regional variation. Take “road” as the most popular. Across London over two in every five property purchases this year have been on a “road”, compared to just one in six across the North East.

A higher proportion of purchases on “Gardens” and “Squares” take place in the capital while the North West accounts for a fifth of all sales on “streets”, with “terrace” also more common I in northern regions. The South East tops the league for the volume of sales in locations named “Place”, “Way” and “The”, the South West for “park” sales. More properties across Wales than any other county do not have street names per-se.

Where Are Different Names More Prominent?

And So What?With the number of new build starts and completions at their highest levels in a decade, over the coming years there will be numerous new developments that require an address. While many local authorities and developers ask for local suggestions, it is perhaps also worth considering whether there is any financial gain for choosing any specific name.